To start from the beginning, and please do if you haven’t: Part 1 (click here)

“Fat?! And you thought you were fat? You wanna see fat?! I’ll show you some fat!”

This was the adult me talking to the me in the pictures of when I was younger. I really wasn’t fat at all, maybe a little pudgy in some of the pictures; and by no means was my body the abhorrent image I remember holding in the mind’s eye of my youth.

It wasn’t always like this. Prior to the H-Bomb being dropped upon my psyche that fateful day in the boys department of Muirhead’s Department Store (see part 1), my earliest memories are of being surrounded by girls and woman at church as they are gawking and pulling at me, pinching my cheeks and going on and on about how cute I was and how beautiful my long white/blonde eyelashes were. 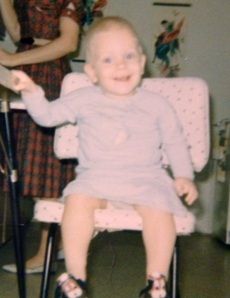 There was so much adulation heaped upon me that when I was 5 years old I cut off my eyelashes thinking it would make them all stop pawing at me. I was wrong; it only fueled them more. You would think that a young boy growing up with all of that positive attention toward his cuteness would build a strong self image and a strong sense of self worth. 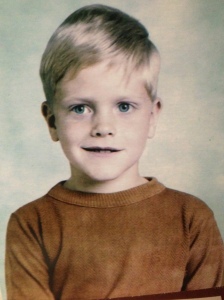 What happens to a child when a great portion of his self worth is built upon being cute? And what happens when he then grows out of his cuteness, and instead is labeled something horrible, such as HUSKY? I’ll tell you; I began to judge my body as imperfect, not cute and not lovable. I began to feel  unworthy of physical love.

Luckily for me, at a young age I knew I possessed the ability to make people laugh, and that gave me enough confidence to carry me through. But as far as my body was concerned, I felt less than; I felt unworthy.

This sense of physical unworthiness drove me to work hard on my body, trying to make it worthy. Through my teens and into young adulthood I would work out sometimes 6-7 days a week…. and I remained unworthy.

Worthy, in my mind’s eye, was an image of physical perfection; an airbrushed image of the perfect body. I remember staring in the mirror, with disgust, thinking, “How could someone love this body?” The sick part to this is, at one point, I was staring at a body in the mirror that looked like a slightly softer (not as cut) version of Mark Wahlberg’s famous Calvin Klein ad.

Because I could not love my body, I was incapable of allowing someone else to love me or my body. It wasn’t until recently that I realized that this physical unworthiness that I held onto for so long was the impetus for the destruction of many of my relationships.

The odder piece of this puzzle is that it took me getting completely out of shape, 50+ lbs fatter than my most fit body, in order to begin loving myself and my body.

It was during the darkest period of my entire life, My Dark Period, as my friends would call it (2008-2011), that I purposefully began the journey to loving myself. The events that lead to this dark period created the space into which I began to heal my life. Though this was THE most painful period of my life, and I hope to never experience anything like it again, I am thankful now that it all occurred as it did.

In Part 3 I will go into the events that began My Dark Period and I will explain what I did to turn things around for myself.

The dropping of the H-Bomb.

There I stood with my mom, sparkly-eyed and jumping for joy (in my head), in the Boy’s Clothing department at the opulent Muirhead’s Department Store in Dearborn Michigan, looking at rack after groovy rack of the most spectacular clothing I’d ever seen in person. This clothing looked every bit as exciting as I imagined possible from what I had seen on TV shows, such as The Jim Nabors Hour! And they were mine for the choosing! My dream had finally come true!

Because we were the poor preacher’s kids, the Muirhead’s (members of our church when my dad preached in Dearborn, who owned a very high end department store) invited us to come to their store and pick out 2-3 outfits each before school started. I can still smell the richness of this store… it emanated the scent of wealth.

As I stood there, my mind exploded with images of how great I would look as I strutted down the hallway flashing people the peace sign on my way to my classroom on that first day of school. Every head would turn and gasp in awe of my grooviness! As I stood there contemplating which of these amazing outfits I would first try on, my world came to a screeching halt.

As I’m hearing in the background, nearly drowned out in the midst of the purple haze of my glory,

“… you seem to be in the wrong section…”

The sales woman begins to whisper to my mother in a tone as if she were speaking of a horrible and unthinkable disease.

“What?!” Snap! …goes my head just in time to witness the sales woman pause for a few seconds more to look over her shoulders, in either direction; I guess to see if the coast was clear for what she was about to do.

“Ahem, you see ma’am, this section is for slim boys” as her voice became even softer, and slightly malicious, as if she knew she was about to drop the H-bomb on a little boys heart.

“… your boy is obviously HUSKY.”

As the mushroom cloud was forming above my head, and before I could completely comprehend what exactly just happened, she turned to lead us to the department especially assigned for my “type”.

I can vividly remember taking that long walk of shame to the far corner of the boys department, with my spirit completely crushed,  as I was placed in front of the ugliest rack of beige clothing I have ever seen. The letters of the sign hanging over the one, singularly very sad rack of clothing, designed especially for me, simply read, for the entire world to see, in big fat, chunky bold letters – HUSKY BOYS.

My life was over.

It was official. In that moment, on that day in the late summer of 1971, at the age of 7, I was fat… unlovable…and obviously not worthy of groovy clothing.

This moment in time forged the basis for my self image that would follow me for the rest of my life through to adulthood. I grew up thinking I was fat… with varying degrees of non-love for my body.

The power of love. We have all heard that love has the power to heal. This is something that I know to be true.

As we now have scientific proof that we are ONE WITH ALL THINGS, this would mean that we are ONE with ALL things. We are one with the good, the bad and the ugly. This universe contains the potential for ALL THINGS, good, bad or ugly. I have always told people that this universe is a magical place; however you imagine this world to be, you are correct. If you are focused upon a world that is dark, scary and dangerous – you will always be proven correct. If you are looking for that which is dark, scary or dangerous, you will find it and it will most likely find its way to you. You are also always ONE with LOVE, and you can realize its power if you can learn to tap into it.

What this means is life will always prove you right. We live in an EXPECTATION BASED universe. What you expect, truly expect to happen – will happen. Again, and I don’t mean to sound like a science guy, but for those who don’t want to believe this is true, and you like scientific proof, simply google Nobel Prize winning physicist Richard Feynman and his Double Slit Experiment and read the findings. The subatomic particles that make up our universe have unlimited potential and will materialize ONLY that which we expect with our THOUGHTS. And yes, it is true, our THOUGHTS have the power to create…in fact, you are doing it right now.

For example, about 12 or so years ago we rescued two yellow labs that we found “dumped on a deserted road” out by our house. We named them Sonny and Cher. They were both very sick and we weren’t sure they would make it. They had visible signs of Distemper. If you are not familiar with Distemper, it is a neurological disease that attacks the dog’s nervous system. The dog might show spots on their skin that look like black tar where the hair will not re-grow, their teeth might be discolored and most telling, they might begin to have a neurological twitch in their face, mouth or their general head area. Sonny and Cher exhibited all of these symptoms. It was when their twitching became worsened and their health was beginning to deteriorate that we called the vet to have them tested.

The test has two parts, the first test confirms if they have been exposed to Distemper, which they both were. The second blood test, a few weeks later, would then determine how rapidly the disease was acting and how much time they might have. After the first test, our vet explained that it is a very ugly disease and it doesn’t end well as the nervous system is attacked and the body begins to shut down.

I have always believed that LOVE HEALS. Even though I am not a trained healer of any sort – I gave it my best try and asked for my partner at the time to do the same. I would run my hand down their body as if I was petting them and ask that love heal them. I would visualize all of the bad stuff leaving their bodies and all the loving, healing energy entering and healing their bodies. And I did so will full expectations of a healing.

A few weeks later when the second blood test was taken, the vet called and said, “I am not quite sure what to tell you – you dodged a big bullet. Their tests have come back negative for Distemper!” And even though they still have the scars from the exposure to this disease, the twitching reduced over the years to the point it is no longer evident. Yes, our Sonny and Cher are still alive to this day, around 13 years later!

I have used this method of healing with all of our animals. I have rescued dozens of dogs, most from the brink of death. And after they have recovered from the initial trauma, each of our dogs, every single one of them, has lived their lives out without any additional major illnesses!

Use the power of love to heal your life. Expect it. Expectation is the key. If you are not getting the results you think you are expecting, stop and take a deep look at what you’re TRULY expecting to happen. We say we are expecting one thing, the healing, but deep inside we have fear that the opposite is going to happen.

Learn to first let go of your fears – release them with love – expect them to leave you!  Then create a new set of intentions and expectations – and create a new world for yourself; a world of your own new expectations!